Actually, to be fair, in order to enjoy this particular article, you might want to keep your mind in the gutter. That’s your warning to skip this particular piece of content, Mom, Dad, teachers from the past . . . anyone and everyone who may not be overly excited to read about my past party days. This is your chance to make an exit.

For the few of you choosing to stay and brave learning about those party days and, to be frank, my prior sexcapades, you’re welcome for the show. My Venmo account can be found under . . . Kidding! Well, maybe.

Anyway, we all know what déjà vu is, right? A hit song by Beyoncé, featuring Jay-Z. We’re all up to speed! Of course, you may also be thinking about the Denzel Washington movie.

All joking aside, most of us have experienced déjà vu at some point in our lives. What is the underlining meaning of déjà vu? How the hell should I know? There are no letters behind my name indicating some sort of special knowledge, skillset, or talent. I’m sure some people like the sensation déjà vu brings, while others despise it, leaving the rest somewhere in the middle.

A simple, juvenile explanation, sure, but what the hell do you want from me? I done already told you that this article isn’t going to go too deep.

Moving on, who knows what a déjà fuck is? And, more importantly, who has ever experienced it? In case you’re wondering, yes, a déjà fuck is exactly what you think it is.

The first time I ever heard this expression was on an episode of Sex and the City. Funny, I know that without a doubt I am now a Carrie (hello, the Male Carrie Bradshaw!), and I can even admit that sometimes I am a Miranda (aren’t we all?), yet there was a time in my past when I was unabashedly a Samantha . . . And being a Samantha was a freakin’ blast!

But, as the saying goes, all good things must come to an end—and for good reason, too! I’m happy I’ve evolved because, quite honestly, a Samantha lifestyle wasn’t realistic. Or, it wasn’t realistic for me, for my wants and needs. I wanted and needed more—and I’m lucky enough to have found it.

However, before I found it, let’s just say I went on a bit of a scavenger hunt. I was like Indiana Jones . . . Fine! I was like Laura Croft, you know, searching tombs and shit. The tombs, of course, were every single bar in Hillcrest (the ones I hadn’t been banned from, anyway). And the shit I was searching for? Well, I’m not exactly sure what I was searching for. But trust and believe, I searched high and low. Sometimes very, very low. And, more times than not, I usually found some sort of shit. 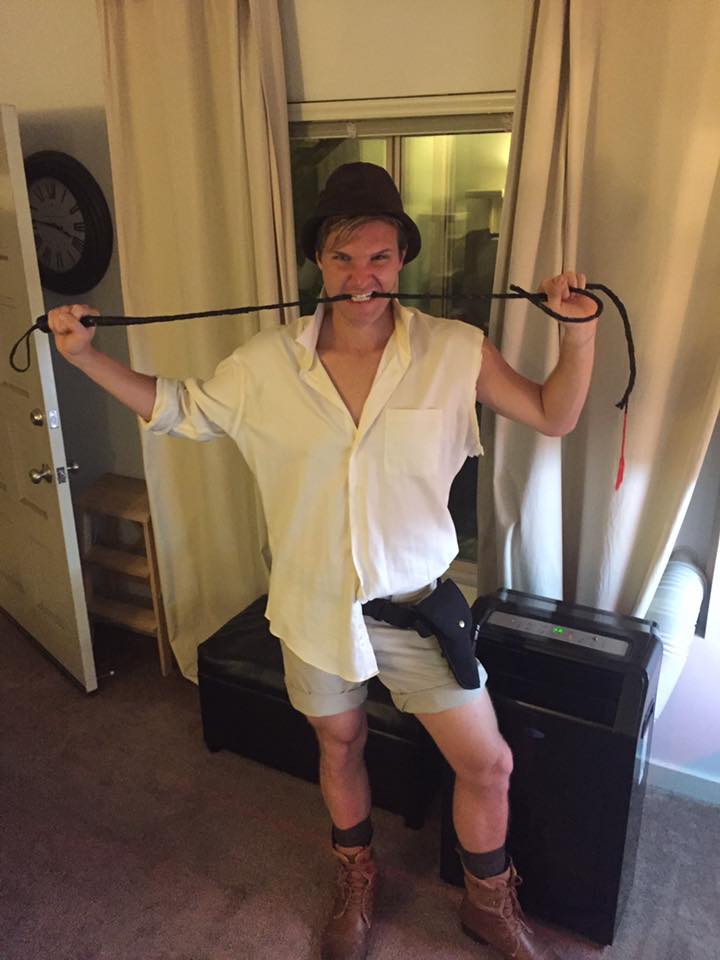 One notable weekend, San Diego Pride weekend, to be exact, I was out and about doing things that weren’t necessarily prideful. Sure, I looked good, smelled good, and had taken the time to lace up my dancing shoes, but I had spent most of the celebratory weekend bee boppin’ around town like I was Miley Cyrus, the “Wrecking Ball” era.

That’s when it happened: my déjà fuck.

To paint you a picture, I was at a dive bar that liked to keep its interior extremely dark. Maybe the electric bill was never paid, or perhaps the owners just didn’t want anyone to see what they might step in. One of life’s great mysteries that will never be solved.

Anyway, cut to me feeling the rhythm of the night, the night, oh, yeah, as I did the gay lap/loop around the cave-esque establishment—you guessed it—searching. This particular search had led me outside to the enclosed patio section, where I promptly ordered a cheeseburger (yes, two cheeseburgers) and a bag of potato chips.

In my defense, I was trying to keep up my stamina and knew damn well that the calories wouldn’t count because I’d be burning them off later that night . . . Burning them off on the dance floor, in case your mind still happens to be in that gutter.

I’d just accepted my drinks from the bartender—a Coors Light for each hand—when I turned and saw a hot guy staring at me from the corner. Well, I thought he was hot at least or hoped he was hot. Remember, this bar kept it dark. Then again, I knew that the alcohol I’d been double-fisting all day and well into the evening would help encourage me to talk to Corner Guy, even if he did resemble Shrek up close and in the dim light.

Turns out, he was attractive. Maybe a hint of a unibrow, but I was willing to roll with it. And roll with it, I did.

So, after a few drinks, a couple of spins around the dance floor, and a round or two of Standing Twister (you know the game: right hand, left cheek; left leg, right shoulder; etc.), I suddenly realized that I had already met this Corner Guy, Non-Shrek, Hint of Unibrow fella.

It was then that I was hit with a rushing sensation of déjà vu. Or, you know, the feeling of déjà fuck. As it turned out, I had previously played Twister with Corner Guy, Non-Shrek, Hint of Unibrow when I lived in Carlsbad, roughly a year and a half prior to this encounter, which took place in Hillcrest, some forty miles away.

Blame my forgetfulness on the dark bar, the copious amounts of alcohol, or my love for the game of Twister, but before you judge, just know that as soon as our first connection back in Carlsbad was established (okay, several minutes after it was established), I quickly turned into Celine Dion.

Or, it all came back to me as soon as the fog cleared from my brain and I mentally scrolled through my Rolodicks—er, my Rolodex. What can I say? It’s a small world, boys and girls. Take that literally or figurative, whichever you deem fit.

Did I take my déjà fuck home again that night? A gentleman never kisses and tells, so let me tell you that, yes, I did take him home that night. It was Pride weekend after all, and I was feeling . . . proud. Or something like that.

If you thought the story ended there, I have just one thing to say to you: Surprise, bitch—times thrice!

I ran into my déjà fuck less than six months later at the same bar. He remembered me; we exchanged pleasantries. However, when I texted him well into the night to, you know, make sure he got home safely, the motherfucker left me on read. I guess he found a fresh component to play Twister with.

I dodged a bullet, though: He’d put on some weight and his unibrow had gotten much thicker. Think Frida Kahlo.

However, don’t cry for me; I didn’t exactly go home alone. I eventually ended the night with someone very special. Someone sweet, rich, and cream-filled. Someone I actually took home on a regular basis, who never—not once—disappointed me: Little Debbie. Little Debbie Swiss Rolls, to be exact.

And she is the absolute best déjà fuck I have ever experienced. Period.