You are here: Home / Dating Advice / Be Careful What You Wish For

Does the fact that January 2019 disappeared faster than a Keanu Reeves movie at the box office scare the hell out of you? It does me.

Whoever wished for time to speed up should be forced to binge-watch Lindsay Lohan’s new reality show. Because, simply put, they got their wish—it came true. Time seems to have overindulged in a cocaine-fueled weekend. Too much “booger sugar,” if you will. And now, as a result, can’t slow down.

In all fairness, everyone has wanted time to speed up at some point, right? Whether it was to get through a rough week, difficult job, or a painful breakup, we’ve all wished to get over that invisible hump in hopes for better days.

But look at where we all are now. No one has time to do anything, because time is moving so rapidly that if you blink, it’s tomorrow. And who has enough clean underwear for it to already be tomorrow? (Reason 3,568 I go commando, in case you were going to ask.)

Unfortunately, we have no one to blame for this little quandary except for ourselves. After all, everyone’s well versed in the popular warning: “Be careful what you wish for.” Yet, who among us has actually heeded that warning?

Not yours truly, that’s for sure.

Here is where I willingly throw myself under the bus to make a point. If I threw myself in front of the bus, what with all this extra holiday weight I’m still carrying around, I’d likely dent it. 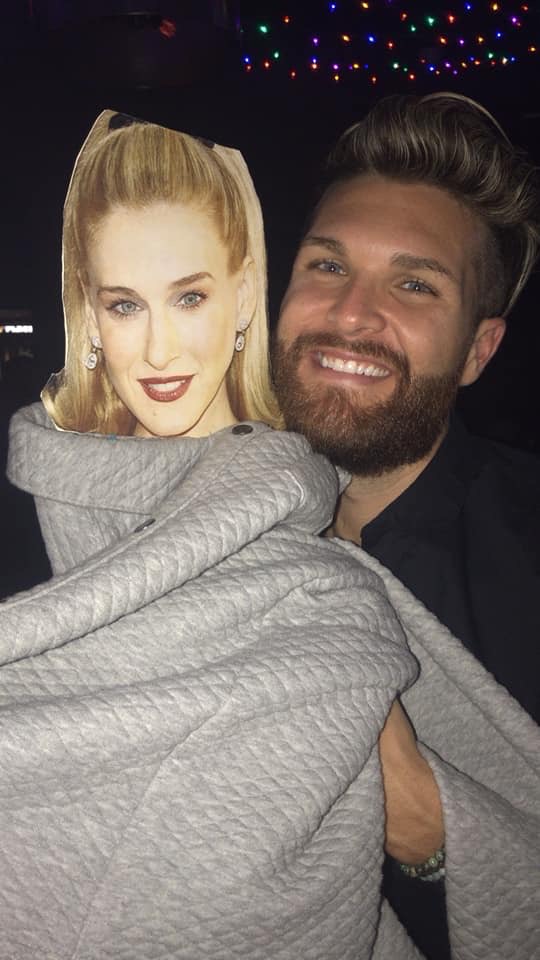 Oh, who am I kidding? For those who know me (count your blessings), I’ve told anyone who would listen that I’m the gay, male equivalent of the famous, fabulous, and fictional (all right, semi-autobiographical) sex columnist.

Not only do I, too, write about men, dating, and relationships—albeit, with a homosexual angle—but I’m also pretty fabulous with an exquisite taste in both shoes and clothes. And, like Carrie, tend to go after guys who are unavailable or just plain wrong for me.

What does this mean, exactly? What it means is that I lost my previous website . . . and all of the original, funny, inspiring, and award-winning content that went with it. Okay, my previous blogs never won any awards. However, for one or two people, they offered some sort of solace.

For those who have followed me over the years, I lost everything—from It’s Time to Open Up Your Fucking Pie Hole to How to Tell If a Guy Is a Douche, even two of my most recent and favorite articles, Mother Fuckin’ Liar and Overthinkers Anonymous, are gone.

Now, who remembers the episode of Sex and the City (season four, to be exact) where Carrie’s Mac crashed, causing her to lose everything? And why did she lose everything when her computer crashed? I done told you! A bitch failed to back up!

Of course, I could have gotten my website back, including all of my old blog articles. But for a price. Remember, it’s 2019—you can essentially get anything you want . . . but for a price.

More on this later.

In the meantime, cue Alanis Morissette, because it’s ironic. Don’t you think? I put out into the universe that I wanted to be like Carrie. In a way, I became like her, experiencing some of the good, some of the fun, and lots of the shit.

Perhaps I should have been careful what I wished for.

In all fairness, I wanted to be a writer way before I was introduced to Carrie Bradshaw. I started writing my first suspense novel when I was 12-years-old. Since then, besides Hollywood movie star, I’ve wanted to become one thing: a writer.

Poof! Now in my mid-twenties, I’m a writer. (For those of you questioning the first part of that statement, I said I’m a writer—not a mathematician.)

I’ve self-published three murder mystery eBooks; had two full-length, crime fiction novels released by a traditional publisher; write a column for a print magazine; completed more than 20 short stories (many chosen for publication by online platforms and anthologies), and supplement my income with freelance writing projects.

Sadly, I’m not exactly the writer I had hoped to become. Well, not yet, anyway. There’s still time, right? And I’m actively (slowly, but still actively) working on it.

Wait! That’s not exactly true. I am the writer I’ve always wanted to be, writing exactly what I want to write. It’s just that I’m not where I want to be in my career, per se.

You see, not only did I want to become a writer, but I also wanted (still do) to have a highly successful writing career. Like Stephen King or Nora Roberts.

Perhaps I should have been careful what I wished for.

Or, as my best friend often reminds me, more specific what I wished for.

I wished for the universe to make me a writer. The university delivered. It’s not the universe’s fault I wasn’t more detailed with my wish.

Recently, this idea got me contemplating other people’s wishes. And now, I can’t help but wonder . . . How many out there are living with a wish that is insufficient? And, is it better to have a piece of your wish than none of it at all? Can you be happy with only part of a wish?

What about the people out there who aren’t living an authentic wish, but a wish for someone else? In those circumstances, are they happy? Truly and fully happy?

That’s another problem with wishes . . . How many people actually wish to be happy? Genuinely happy? A rather simple, almost apparent request, but how many people ask for it? How about strive for it?

Shouldn’t that be what every single one of us wishes for . . . happiness? Regardless of what your wish looks like, don’t you want it to at least include happiness?

It could be time for all of us to, in the words of Carrie Bradshaw, “Breath and reboot.” And for many different reasons.

Like I mentioned earlier, I had an opportunity to get my website and all of my old content back. This opportunity came with a $500 price tag. Tempting at first, but I really couldn’t wrap my head around the idea of spending good money for what was essentially the past.

Instead, I’ve decided to invest in my future. I’m rebooting. Or, in my case, rebranding.

Further, I’m re-evaluating my wishes. Which is one of the reasons why you may have noticed a brand new website. And, if you’re reading this, my first blog article—not just of 2019, but for the said new website. It’s the first step in ensuring my wish(es) come true.

To be clear, I’m starting over; starting fresh. I’m getting more detailed and hands-on with my wishes. I recommend you all do the same.

So, my advice: Yes, be careful what you wish for. More importantly, be prepared for when those wishes come true . . . and have faith that they will!

I’m well aware of the fact that my own wishes can—and will—come true. All of them, and every single aspect, even the part where I eventually have a wildly impressive career like Mr. King and Ms. Roberts. How do I know this? Because there is room for me. There’s room for you, too. Just have patience, because sometimes, wishes take the scenic route.

Finally, don’t forget that when you do re-evaluate or reboot your wishes for 2019, make sure to include happiness. You can thank me later.